The Story of Shea and the Great Green Wall

Since 2007 Africa has been united in building the Great Green Wall — an 8,000 kilometer strip of reforested land across the continent and the biggest living natural wonder in the world.

A decade since starting and roughly 15% underway, the initiative is planting trees along an ecological transition zone, called the Sahel, to act as a buffer to prevent the Sahara Desert from expanding south. Combating desertification and land degradation will enable the local people to work their lands, providing food security, jobs, and a reason to stay for the millions who live along this tree wall.

The Great Green Wall matches the natural boundary of the Great Shea Belt from Senegal to Uganda where shea trees grow in forests and savannas.

For centuries, these natural shea parklands and the nutritional, moisturizing, and healing properties of shea have played an important role for the Sahel peoples. Shea fruits and kernels are a source of essential fats, vitamins, and minerals. Shea butter is used widely for cooking, for skin protection and regeneration. All parts of the shea tree are used in traditional medicine. The trees’ biomass is used as organic fertilizer, and their extensive root systems stabilize soils, allowing for an ecosystem of other plants and animals to thrive.

Nowadays shea butter is used in the food, confectionery, medical, and cosmetic industries worldwide, and shea butter production is a multibillion dollar business. Shea butter is an ingredient in thousands of cosmetic products, and recently, to lower saturated fat content in foods, the European Union made the addition of 5% shea butter in chocolate compulsory.

However, a few key issues in the shea industry limit the positive impact it can have on West and Central Africa today:

In June 2021, Serious Shea was selected as a leading solution by “Trillion Trees: the Sahel and Great Green Wall Challenge.” Serious Shea was formally endorsed as a Top Innovation by the World Economic Forum’s Uplink and Trillion Trees and announced by the United Nations for its deforestation-free, zero-carbon shea value chain and its financial inclusion of women.

Serious Shea’s solution to the critical issues currently affecting the shea industry is to build eco-processing clusters that utilize only clean energy technologies, and to help the women’s work groups gain access to international markets with quality control,  logistics, and as part Serious Shea owners, while restoring and protecting the “Great Shea Wall.”

Serious Shea’s Butter is made with clean energy

Under current methods, over 10 kilograms of wood are burned for every 1 kilogram of butter produced. This has severe repercussions for natural habitats and the health of the women workforce by smoke inhalation.

The carbon emissions released from felling trees is a significant contributor to global warming (estimated at 25 kilograms of CO2 equivalent per kilogram of shea butter produced). Climate systems worldwide are influenced by the increasing intensity of the Sahara Desert heat, making the cooling effect of protecting and restoring the Great Shea Wall a global priority.

Practically all waste materials are consumed in the process: fruit pulp makes a great organic fertilizer, nut shells are burned as biomass fuel to steam the shea nuts, and waste water is filtered and re-used. It is expected that a center will produce 300 tons of compost per year.

By eliminating the use of wood fuel entirely, Serious Shea’s clusters will save over 2 million tons of carbon emissions per year by 2030. The eco-processing clusters will be tree planting and management centers that protect and restore the shea stock for future generations.

Despite women dominating the workforce of West Africa’s shea industry, one critical issue is that they are largely limited to low-skill, low-income tasks such as collecting and processing nuts. In one study, it was found that 94% of the women worked solely in nut collection.

As the women are cut off from the higher profits achieved in international markets, their incomes are extremely low, with over 50% of women earning less than $350 per year. This reduces the positive impact that the shea industry could have on local economies.

Serious Shea will address these concerns by building eco-processing clusters in rural areas that will be 90% run by women. The eco-processing clusters will also provide the women with training and mentoring, which will vastly improve their ability to work in more profitable areas of the shea value chain, such as group management and leadership.

The individual women will receive at least 1.5 times the current market price for selling 50% to 100% of the kernels they process to Serious Shea. The women’s groups will be 10% stakeholders in the Serious Shea value chain for a Great Shea Wall Community Fund, which will be used for health care plans and education.

At least $4 from every CLEO individual jar or over 51% of profits goes back to the Great Shea Wall communities to scale the number of eco-processing clusters and to plant trees. As 10% stakeholders of CLEO, the women’s groups make a 10-times higher income in addition to the income increase gained directly from processing nuts for Serious Shea. Consequently they will be able to finance development needs such as health care plans and education.

Source, Vision 2050: A Time to Transform

Serious Shea’s first eco-processing center will be built near Koudougou, about 75 kilometers west of Ouagadougou. Serious Shea will create over 1,000 jobs with clean energy in its first year of production.

Balance through socially inclusive agroforestry practices must be achieved so that the shea tree can continue to contribute to people’s livelihoods and play its ecological and environmental role in the reconstruction of the Great Shea Wall.

The drought, famine, conflict, and migration caused by deforestation in these areas is a global responsibility. Serious Shea aims to transform the shea industry as part of the reforestation initiative in the Sahel. By buying CLEO cosmetics, you are contributing a lot more than planting a shea tree. 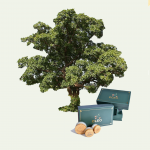 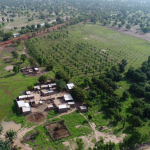 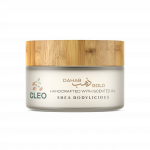